Facebook has suspended former President Donald Trump for two years. His accounts were frozen after he praised supporters who stormed the U.S. Capitol.

A Rockaway man and alleged vice president of a North Jersey chapter of the Proud Boys told his mom he “led the storm” in the U.S. Capitol on Jan. 6, efforts he said confirmed that “Trump isn’t going anywhere,” according to federal court documents.

Shawn Price claimed he was tear-gassed, pepper-sprayed and hit with rubber bullets as he and four other chapter members initiated the push of people forward into a line of officers who were securing the Capitol building during the deadly riot, federal task force officers said in their reports.

“We did it bro we took it the [expletive] over, we are inside the Capitol now,” Price allegedly messaged a friend on Facebook, “Me and three others stormed it and no one else would until we started then everyone stormed.”

It is not believed Price, 26, breached the Capitol building, but his alleged criminal activity on the Capitol grounds led to his arrest Tuesday morning at his Rockaway home on charges of obstruction and disorderly conduct. During a federal court hearing in Newark on Tuesday, a judge released him on $100,000 unsecured bond provided he wear an ankle bracelet for the court to monitor his whereabouts. 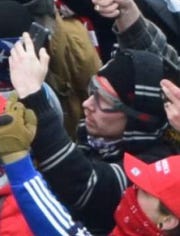 Shawn Price of Rockaway, a vice president of the northern New Jersey chapter of the Proud Boys, told his mother on social media that he “led the storm” in the Capitol on Jan. 6, according to the FBI. (Photo: U.S. Department of Justice)

Harley Breite, Price’s attorney, said by phone Wednesday that his client had no malice in mind when he traveled to the Capitol.

“My client simply wanted to voice his concerns about the erosion of what he feels is the American fabric,” Breite said. “He never had any intent to harm any person or property.”

Breite said he has seen no physical evidence to corroborate any such claim, adding that much of the case relies on social media posts and texts — words that can easily be taken out of context or misconstrued.

The lawyer told the judge Tuesday that his client was not a risk of flight and poses no danger, having remained at home with his mother since January. He could have fled as others were being arrested, but he didn’t, Breite said.

Catherine Murphy, a federal assistant prosecutor in Newark, said Tuesday that Price had shown violent tendencies before January’s insurrection, pointing to a December incident in which he “bragged” about injuring someone.

Records show that Price attended several pro-Trump rallies in 2020 as a member of the Proud Boys, including one in Washington, D.C., between Dec. 12 and Dec. 13. Price sent several videos and images to friends that captured the nighttime skirmishes, in which at least 23 people were arrested and four hospitalized with stab wounds, records show.

Price said he “tagged a guy good” and he and “his guys” ripped sticks and flags out of hands and hit people with them, according to police records. Officials say Price can be seen in the video punching someone in the face and chasing the person down a sidewalk.

But despite prosecutors’ claims that Price is a violent person, Breite contends that if he were as violent as he is being portrayed to be, “why did it take the FBI six months to arrest him?”

“He has lived with his mother in Rockaway for the last seven years. How dangerous could he have been?” Breite said.

Price does not own any weapons and has not applied for a firearms purchaser identification card, and authorities did not find any firearms in his home or truck, Breite said. Any weapons that are retrieved are often from those people who commit acts of violence, he added.

Prosecutors say Price’s mother, on Facebook Messenger, asked him during the riot if he got into the Capitol building, asked when he was coming home and shared remedies for neutralizing chemical irritants on the skin and eyes. Price allegedly told his mom that he saw two people get shot and killed in front of him. However, officials say only one person who died in the riot was killed by a gunshot: Ashli Babbitt, who was inside the Capitol building.

Breite declined to say whether his client is a member of the far-right Proud Boys group, known for its  history of violent confrontations, instead saying, “Whether or not he is a member is not indicative of any crime being committed.” 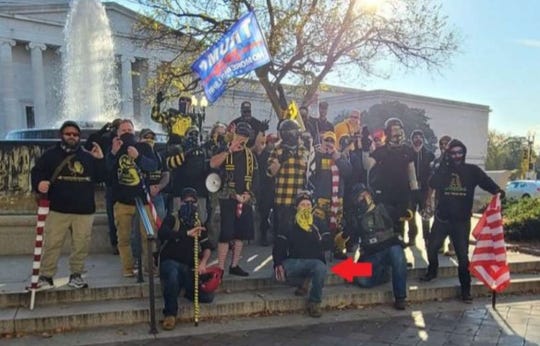 Price is one of three defendants charged in connection with the Capitol riot whom Breite, a Paterson-based attorney, has been retained to represent. Breite also represents Scott Fairlamb, a Stockholm man and gym owner who was ordered by a judge in April to be held in federal custody, and James Breheny, a Little Falls man and alleged member of the Oath Keepers, a far-right militia organization.

Federal authorities have charged over 465 individuals in more than 40 states with involvement in the Jan. 6 riot at the U.S. Capitol, and arrests continue almost daily, USA TODAY reported as of Wednesday afternoon. New Jersey residents accounted for 15 of those arrests.

Breite said that having learned more about his three clients, none of whom he says carried a weapon or had intent to harm anyone on Jan. 6, he believes they are being cast in a negative light.

“There is a sense that expressing an opinion that the government finds unpopular can sometimes cast you in a net with others whose actions and intentions are very different than yours,” Breite said.

“That concerns me,” he added.

Price has prior convictions in Sussex County — he used to live in Hopatcong — and also has ties to West Orange, authorities say.

Price’s case will be transferred to a federal court in Washington, D.C., where all cases stemming from the Capitol riot are being heard. He is expected to have an initial hearing next week.

33 mins ago Music Food and Life

7 hours ago Music Food and Life

9 hours ago Music Food and Life

11 hours ago Music Food and Life

15 mins ago Music Food and Life

33 mins ago Music Food and Life